Our local paper, the Sentinel and Enterprise Sucks. Well, not for Fitchburg, just for Leominster. There is a bias against Leominster that just about anyone you talk to has noticed. A shame since they were the ones who bought out the Leominster Enterprise all those years ago to create a ” Twin Cities”-focused paper. Not any more.

WHY do they hate Leominster? Who knows. The storms the other night caused a fire in Leominster, but you wouldn’t know that from reading the Sentinel’s website. I saw the story on Bostonchannel.com, and it appeared to be just up the street from my house. So yes, of course I’m interested. That storm was big local news! Even when it was being covered on television, the focus was on Leominster, not Fitchburg, because of the path of the storm. So maybe some feelings got hurt? (Trust me, next time there’s a horrible storm, Fitchburg can keep it.)

Thinking they needed an extra day to get the story, I went to their web site today. Nothing about the fire, but they DO have the following top story: Russia Probes Parasailing Donkey Stunt. Please note, dear readers, that this story is covered on the “Local” section of the paper.

Fitchburg Sentinel, this is why you suck and I will not even miss you when you’re gone.

I have a headache right now, and it won’t go away. I don’t believe it’s anything that will kill me, so that’s good. I don’t have time to die right now. I have lots of things to do and to see. One of the the things I need to see is the office in my rear view mirror. [ba-dum-bum]

I put seventy dollars worth of gas in my car today. And I am actually nervous about it lasting until next week. This weekend we will be keeping any and all road trips to a minimum, I can tell you that. It had literally been years since I’ve had to worry about buying gas. I don’t like to have to worry about it. I can definitely see the appeal of buying one of those very fuel-efficient little micro machines – at one point in time my 22mpg sounded pretty decent to me, for a mini van, but now I want at least twice that. But I’m not in a position to buy a car right at the moment, not when mine is running well, etc. etc.

Sorry, I shouldn’t bitch. There are people dying in cyclones, earthquakes, crane collapses, train accidents and the like. That would be worse than paying $4 a gallon for gas.

How many of you completely missed yesterday’s change to The White Rhino Preservation Society News? Huh? Three of you? And nobody said anything? I give and I give and I give, and what do I get? Everyone is too busy clicking “I feel lucky” on Google Calendar.

I should just start talking about rhinos all the time. 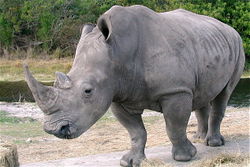 Hellish morning! First I don’t want to wake up but the stupid birds (I hate them with a white hot fire that consumes my soul) are back. I guess I need to figure out how to borrow a shotgun again. Oh, and then? No hot water.

And after all that, I go down stairs and the entire first floor is missing. I have no idea if the dog buried it in the back yard or what.