Kip may have been the funniest person I’ve ever met. Well, funny because he had the same sense of humor as me, which is priceless in a friend. We shared a love of old tv sitcoms; his favorites were the world of Paul Henning’s design, especially Green Acres. We were the only two people on the planet who saw the brilliance of Tom Arnold’s Jackie Thomas Show. He understood the perfection of the book of Leonard Nemoy love poems that became shared property of the group of tech writers to which we belonged. Some of his legacy lives on at this website. We had a conversation about That Girl, and how it would suck to be “Mr. Marie.” That started a list of other people with first names for last names. The paper hung outside my cubicle and we all contributed. The List of Famous People With a First Name for a Last Name has been on this site for 18 years now. Two other lists, Famous Bobs (anyone named Robert was included, see “Bob Louis Stevenson”) and Famous Dicks were also created.

Kip and I lost touch but reconnected via Facebook a few years ago, where I learned of his liver problems, and how it kept him from working, which kept him from being able to afford health insurance. If he could get the liver covered, given it was a pre-existing condition. He needed a transplant, and couldn’t afford to get one. I screen captured part of a post of his from 2011, which I’ve included below.

I want you to read what he wrote closely. This man knew that to survive he needed a transplant, and he needed insurance that covered pre-existing conditions to get it. He was waiting for ACA to be available – he assumed in 2013. By the time the political bullshit got worked out and Universal Healthcare FINALLY kicked in on Jan 1, 2014, his liver (and now his kidneys) were failing. He was hospitalized but it was really too late to do anything. He died less than a month after the thing he hoped would keep him alive was finally available.

The only death panels in this story are the politicians would fought to keep the people who need it most from getting insurance necessary to stay alive. As far as I’m concerned, politics killed my friend. Do not DARE try to tell me how bad the ACA is, when a lack of it hastened this man’s death. Just do not. 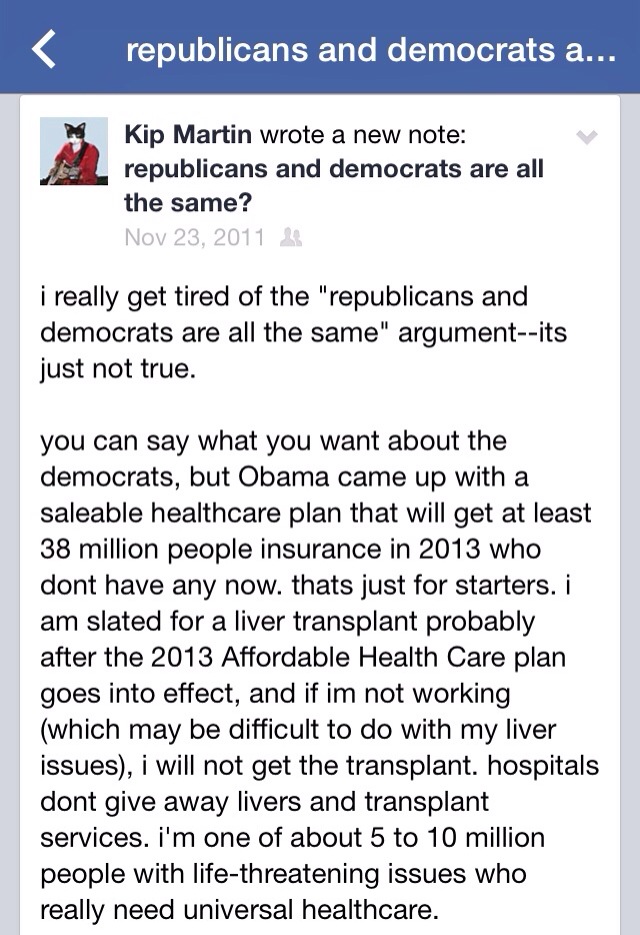 One thought on “Preventable Loss”