My desk at home is next to a window, which if you know me, is practically a need, not a want. I love looking out the window. This morning I was rewarded with a trash truck ballet, in which two different trash trucks slid and skidded and basically had no control. Ya, it’s slippery on my street. No sanding again, which is nice. Eventually the truck that slid past the end of my street was able to get itself turned around before the other one almost took out a small snow bank. Eventually they just parked the two trucks and all stood in the street talking, probably asking themselves if it was really worth it to come in to work this morning.

Photo evidence of the two trucks out my window. 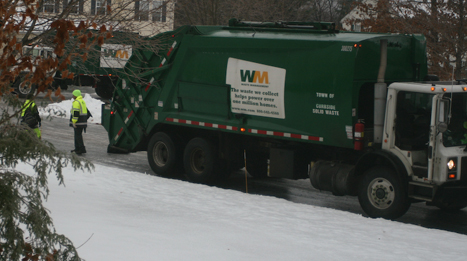 Sorry, server problem followed up with user error. I think I’m all set now. You can let me know if I’m not. You always do.

Television recommendation: If you aren’t watching “Reaper” on the CW network (around these parts I think that’s what used to be Channel 56). Best. Show. On. TV. If Ray Wise doesn’t win a Best Actor Emmy…

This class took “electronic music” down to a level that only Phillip Glass could appreciate. Our instrument was a box with a couple of dials and a reel to reel player. We spent weeks learning how to wire up the two so that we could take sounds we’d recorded onto a cassette, get it into the box with the two dials, and then out into the reel-to-reel so that we could get our final project grade.

It is as horrific as it sounds. All I remember about mine is that one of the sounds I captured for my project was a toilet flushing. The two knobs on the box were basically controlling modulation and something else. One of you probably knows. Or cares. We just basically got it to make beeps and boops and screechy noises that I didn’t think were anything like music at all.

Thinking back, I’m wondering why we didn’t storm the office and demand this class be removed because it was such a ripoff. I think we might have been too young to realize that we could do that…after all, we were paying for the credit hours. But there’s something about being 20 years old and a full-time student living on campus that doesn’t make you think of yourself as the customer, as in “the customer is always right and that was NOT electronic music.”

(You young people might not catch this reference. So I think maybe I could call this post “Am I Being Punked?”)

Yesterday was one of those days. Mr. Dump had an appointment for a small surgical procedure, and I had an appointment with my doctor. I also had Junior (I have him again today…last two days before school starts so no more camp). I used up a tank of gas just driving around from appointment to appointment yesterday. Junior got an invite to his friend’s house, but she lives in Gardner, so that was 20+ minutes each way. What was great, though, is that it meant someone was watching him while I was in my appointment.

After Mr. Dump was out of recovery and I settled him back in at home, I went back to Gardner to get Junior. We decided to stop at the Hannaford at Twin City Mall on the way home to get something for dinner. While standing with my cart trying to think of the other things I wanted to buy (iced tea and potato rolls) a guy was standing about 6 feet to my right. I catch some activity out of the corner of my eye and see…a copy handcuffing him. Nothing was being said, it was all very quiet. I quickly made sure Junior was still standing behind me (and wasn’t planning to scoot around the cart over to where this was happening. I could feel my blood pressure go up 20 points. I made eye contact with a couple of people standing in the 12 items or less line (which is what we were standing near) and we all had this “Are you kidding me?” look on our faces.

I can honestly say I have never stood that close to someone being arrested. I mean, to the point that I felt like I was assisting the cop…that’s how close they were to me. Junior kind of took the whole thing in stride, like this stuff happens all the time. Maybe I should ask more questions about what goes on a summer camp!

Saw a “news” article this morning that something is planning to sell Jerry Garcia’s stereo speakers and bidet.

The thing he used to clean his arse with.

Okay, no offense, but why on earth would someone want to own such a thing? I know that there are people out there who are gigantic fans, still, of his, but really, do you need his bidet? What about his toilet, he probably used that a lot more than the bidet. Or was there a urinal cake somewhere that he peed on?

It looks like the proceeds from this sale will be going to charity, so I’ll cut them a little slack, but please, people, if any of you want to buy my used appliances, contact me offline so we don’t have to deal with the embarrassment of holding a public auction.

I have decided to pass along some wise words of wisdom [modesty!] to all of you today. You can thank me later, by showering me with Nerds and other appropriate offerings. (The good offerings would be the ones that fit on the front of a Canon XTi, you know, to clarify.)

Let’s just say you’re me. Or someone like me. Or you, but you live in this area and drive to someplace south on 495. IF you leave the house and realize you have forgotten to put on deodorant, but then decide you can stop at Bolton Orchards because they sell some grocery items, be prepared to be offered one and only one type of deodorant. Oh, and it’s an icky roll-on, so if you put it on under your clothes, you can sit and worry that it will never dry and will put some sort of wet stains on your shirt. And then you can realize that it cost six dollars instead of the $2 you normally pay for your own brand when it’s on sale. And then you can be horrified to realize that your armpits smell like those gigantic lilies they put in flower arrangements that give me migraines. That’s right, I smell like an allergy-inducing floral arrangment today.

When I go to the baseball game tonight, bees are going to attack me for sure. It was nice knowing you.