Had fun at the North Leominster Little League annual banquet last night. It would have been fun anyway, but Junior getting 2 trophies plus a sponsor-supplied City Championship sweatshirt (thanks, Piper Electric!) was really icing on the cake. No, wait, the icing on the cake was winning a $50 Il Forno gift card during the raffle portion of the evening.

Junior had a great year. Can’t say what next year will hold – there are a LOT of really good players in his age group, but they can’t take the glory of the 2008 season away from him! Hopefully, he won’t pull an “Uncle Rico” and spend the rest of his life dwelling on it, though… if I go 4 wheeling with my boyfriend and break something and ask Junior to take care of my grandchildren Napoleon and Kip, you have permission to shake me. 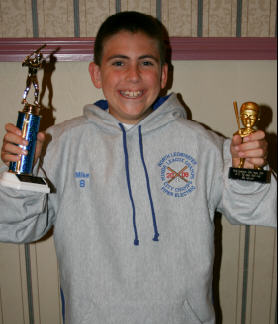 (So that raises the question – what happened to Napoleon and Kip’s parents that they were living with their grandmother? Not that it matters – it’s still one of the single greatest movies of all time. Somebody go build me a cake or something.)