I was over on iTunes looking at the free applications. I like to check at least once a week because there are so darned many new free apps being uploaded. I found one that will auto-generate your pirate, Jedi or stripper name. So that’s cool. And the sample screen made me smile because it had Johnny Appleseed on it. We all love us some Johnny Appleseed around here. And then I looked at the 2nd screen shot and it showed even more Johnny Appleseed details! I dropped a note to the guy who created the application to find out if he’s a local (or was at any time) because really, how often does ANYONE use Leominster on a sample form?

Screen shot at iTunes (no really, go ahead and look for yourself!) 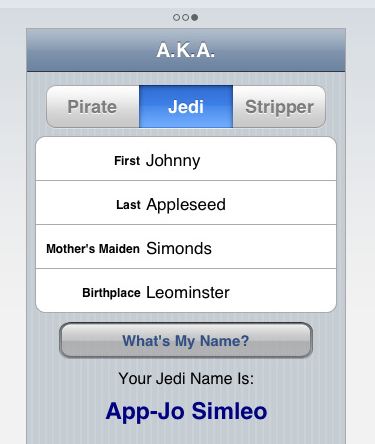 [Update Sept 12: When I went in to use the application, I discovered that the above info is actually on screen as an example, so it’s not only on iTunes, it’s in the application. Very amusing to me, “Mad” Patch Ridingcrop aka Diamond Leatherhips aka Laf-Jo Rocfit.]

We filed our taxes about a million years ago. Or maybe it was a week ago. Anyway, we are due for a refund and I would really like for them to pay me because I have some bills that aren’t going to pay themselves, doncha know! Plus Mr. Dump’s vehicle was making a $386 noise. When he took it to find out what the problem was and get an estimate…oops, we fixed it without calling you to tell you how much it was going to be. That’s so not cool. I won’t name the place because I really like them, and the work they do, but this was a big stinkball to have to pay it today.

Also, for those of you in the Leominster area, we popped in to the Blue Marlin for lunch. You have GOT TO SEE THIS PLACE! The decor is beyond excellent. I’m not even going to spoil it for you, but you have to go. I know, it looks ultra swanky from the outside, but the menu is definitely not. Heck, I could have gotten a hot dog for lunch. Or dinner (because the menu is the same). Go go go and then come back and tell me what you think of the place. (p.s. I can highly recommend the clam strips.) Everything is freshly prepared on-site except for some of the desserts, which they get from Auntie Ellen’s Creative Confections next door. Oh, by the way, we popped in there to check it out. Take your wallet and GO. We took the triple chocolate mouse and the bananas foster cheesecake home with us, and we couldn’t decide which was better.

There are songs that immediately put me in a different place and time. Like brings back smells sounds, everything. I’m listening to my iPod on shuffle and the song The Ballroom Blitz by Sweet comes on. Suddenly, I am at Mason’s Bowling alley on a Saturday morning (I was on a bowling team – the Pink Panthers. I have no idea why I can remember the name of my bowling team all these years later, but there you go). There are whole bunch of songs that were on the jukebox at Masons for years – I assume the owner just stopped buying new 45s at some point – because in junior high I was on another bowling team (after school league) and a bunch of those songs were still on there.

But Ballroom Blitz is the one song from that bunch (Telephone Line by ELO was another one) that when I hear it I’m back at Masons. (There are a couple of songs that bring me back to the Mason’s mini golf. I think I spent too much time there one summer, but my best friend lived around the corner and it wasn’t that bad a walk from my house, so it’s not all that surprising.

So anyway, Ballroom Blitz came on and I was just back in that bowling alley in a split second. Candlepin, for you out-of-towners. I think I need to go bowling now.

Okay, maybe not the world, but they are invading my life. You see, I signed on to coach Junior’s FIRST LEGO League Robotics team. They started a league at his elementary school this year (and one other in town – it will expand out next year) and he’s on team Funny Bones. Our team, plus the 4 others from our school and the 4 teams from the other elementary school attended the Mindstorm Madness tournament in Shrewsbury yesterday, 6 weeks or so after our team formed. We were up against 17 other teams, some of them middle school teams who had better robots and competition experience. Our plucky little robot soldiers, after 9 challenge rounds, were seeded FIRST(!!) for the playoff rounds. FIRST! Our average score over the nine rounds was the highest! Was that even possible? I can tell you, I almost cried I was so proud of these kids, and so shocked. When I went into the gym during the break and saw the list of teams, and saw #7 listed first, I refused to believe it was a ranking. But it was.

So we explained to the kids that really, that was the highlight of the tournament, because that’s the REAL show of who did the best. Anyone could get knocked out of the semi-finals by just having a robot malfunction.

Except they didn’t have a robot malfunction. They won each of their semi-final rounds, and won the final against a team from the other Leominster elementary school by a mere 5 points. We won the tournament, the whole thing. And we also got the robot performance award. Our simple little last-generation robot was a tireless little engine that could.

To say I was beside myself about the whole day is an understatement. 7 of the 9 Leominster teams made the elite 8, and 3 of the final 4 and both of the finalists were from our schools. I don’t think I’ll ever see such a thing again, and I will be happy HOWEVER they do at the Leominster Tournament this week. Funny Bones rule!

Forgive the yelling, but the National Weather Service is all about the caps, and I am just copying and pasting.

Just yesterday I was telling people that one of my biggest phobias is fear of bad weather. Driving in a thunderstorm can reduce me to tears. A tornado warning puts my blood pressure into the stratosphere. So this is what I just read.

…A SEVERE THUNDERSTORM WARNING REMAINS IN EFFECT UNTIL 330 PM EDTFOR CENTRAL WORCESTER COUNTY…AT 252 PM EDT…NATIONAL WEATHER SERVICE DOPPLER RADAR CONTINUED TO INDICATE A LINE OF SEVERE THUNDERSTORMS CAPABLE OF PRODUCING PENNYSIZE HAIL…AND DAMAGING WINDS IN EXCESS OF 60 MPH. THESE STORMSWERE LOCATED ALONG A LINE EXTENDING FROM CLINTON TO WORCESTER…ORALONG A LINE EXTENDING FROM 7 MILES SOUTHEAST OF LEOMINSTER TOWORCESTER…MOVING EAST AT 35 MPH.SEVERE THUNDERSTORMS WILL BE NEAR… BOLTON…NORTHBOROUGH AND BERLIN BY 300 PM EDT…A TORNADO WATCH REMAINS IN EFFECT UNTIL 600 PM EDT WEDNESDAY EVENING.

This is part of the the current warning for Leominster:

IN ADDITION TO LARGE HAIL AND DAMAGING WINDS…CONTINUOUS CLOUD TO GROUND LIGHTNING IS OCCURRING WITH THIS STORM. MOVE INDOORSIMMEDIATELY! LIGHTNING IS ONE OF NATURES NUMBER ONE KILLERS.REMEMBER…IF YOU CAN HEAR THUNDER…YOU ARE CLOSE ENOUGH TO BE STRUCK BY LIGHTNING.

Well now, that’s just what I needed to hear!!!

Actually, I was on the phone with Mr. Dump (he was using a cordless). He’s working from home and told me that right before one lightning strike that seemed VERY close, he felt the hair on the back of his neck stand up. I would need a lot of medication right now if I were at home. I would also be in the basement, crouched in the corner, wimpering.