This is a quick post to show that the brain is a wondrous filing cabinet. As is the Internet. Together, they fight crime.

Okay, so to begin, there is a person on my current project whose last name is Pappas. All fine and good. The odd thing is that in my head, I keep calling him Doug. I even wrote it in an email to another person on the team. But his name isn’t Doug. So I started to think – why do I keep wanting to call him Doug? I must know someone else with that name. So of course, now I can’t stop trying to remember. I know it’s not a person from school or work. I also get the sense that it’s someone I knew a while ago, but not just in passing. So I start working through the mental checklist. He’s not from any of my current mailing lists, or from this website. Did I know him from my old BBS? That’s quite possible, and it feels right, timing wise. But that was a loooong time ago. So maybe from CompuServe? I hop over to Google to see what I get. I get a ton of hits, because someone who appears to have been very well-respected in the baseball industry died while hiking about a year and a half ago. I thumb through 22 Google pages of “Doug Pappas” hits and 98% of them were for this guy. Well, I don’t think there was a baseball connection, that doesn’t sound right.

So I start to narrow down my search. Nothing sounds right when I add the word Massachusetts, so it’s not a local thing. So I add CompuServe and get a few hits. I look at the first one, and I know this is the same guy – I did know him from CompuServe. We were both members of at least one similar forum, Rocknet (although we could have been in more than one, this is the one mentioned in the Google hit) in the right timeframe, 1990-ish.

And then it starts coming back. The Google hit says he was into road tripping, and I suddenly realize that he might be one of the two people I used to exchange ugly, horrid postcards with. If true, this would confirm my feeling that I knew this person more than in passing, but not in person, you know? We’d buy the “worst” postcards – the best ones were the old out-of-date ones. And then we’d mail them to each other. So now I’m 90% sure this is the guy…and I check out another link which happens to have his home address, and my stomach kind of lurches because the minute I see it, I recognize it, and thus I have tracked down the Doug Pappas from my past. The unfortunate thing is that this Doug Pappas is the same Doug Pappas who was the editor of the Society for American Baseball Research. The same guy who died while hiking in Big Bend National Park. So in one fell swoop I rediscover an old friend, and find out he is no longer with us.

In my long past, back when I was working for Information Mapping, we used to go nuts decorating our cubes and offices for the holidays. At some point, someone (I am not positive who said this, although I have a couple of people in mind) looked at one garish display and declared it “F’ing Festive” (with the full word in place of the apostrophe). The juxtaposition of those two words gave it an instant place in the hall of fame. I cannot praise it enough. So fast forward 7 or so years, and I still use this phrase, especially when things are over the top.

You know, I started writing this a couple of hours ago, and I can’t remember what I was going to describe to you. Probably the way the house looks from the outside, because I believe I did use that phrase with Mr. Dump the other night. He has the background on the phrase and appreciates its appropriate use.

The Doginator hasn’t tried to eat the tree or any of the ornaments that are sort of kind of within his reach, so that’s good. He doesn’t need to supplement his diet of the buttons off my LL Bean coat anyway. That’s right, buttons with an S. I was kind of wearing it anyway, with the one button gone from the bottom, but apparently the coat fell off the coat rack the other day and he ate another button off. (They are attached with a bit of leather string, and he gnaws through the leather. He hasn’t actually eaten a button, as they are huge. So now I just can’t wear the coat any more, which has me seriously bummed out. I won’t have money to replace it until at least after Christmas. Bah, humbug.

Did some Christmas shopping over the weekend. I was in evil step-monster mode and dragged the poor children to the mall. I have been told that I must announce a momentous occasion here in the dump: My step-daughter and I agreed that an article of clothing was cute. Can you believe it? This hasn’t happened in years. She’ll be 14 in January, and I have no taste in clothes whatsoever. Granted I can’t fit one leg in the skirts at the stores where she shops. So she did pick out a few things and I got all evil and said they were being put away until Christmas. Bwa-ha-ha-ha!

Oh, but she got me back. I am currently obsessed with SuDoku and I showed her how to do it. We each got on a computer and loaded the same puzzle from www.websudoku.com and she beat me at finishing it. Ratzen fratzen kids these days.

Tree is up, lights are up outside and inside (we put red lights around the windows) and the weird little blue window clings are clinging. Bring it on, fat man in the red suit.

I am not looking forward to a full week of work after a short week. Even though I had to work on Friday, most people stayed home so I had the best parking space ever. I have to figure out a way to get people to stay home every day.

I thought it looked more like a Christmas scene, but what do I know… 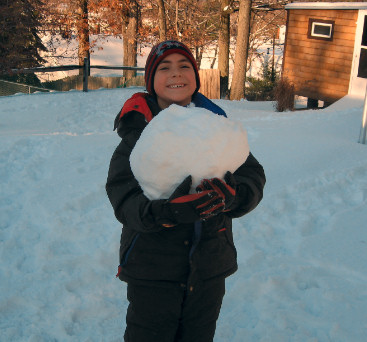 I just had a lovely email conversation with the delightful j-mo, and we had to clear up what may be a regional misconception or just one of those “your family is odd” things. I was asking her about stuffing, and she said they don’t do stuffing because of something Alton Brown said (I am sure it’s gross, I don’t want to know). They do “dressing”. The thing is, we don’t really do “stuffing” either. We cook ours in a baking dish next to the turkey, which technically makes it dressing, but we call it stuffing.

Is this a New England thing, or just my mom teaching me the wrong word?

(For the record, I like mom’s bread stuffing (see?) made with the Pepperidge Farm Stuffing mix, and her meat stuffing, which is ground pork and beef and basically tastes like the meat part of a French meat pie. It ROCKS with turkey. Makes a great post-Thanksgiving sandwich too. Whenever you make those turkey, stuffing, cranberry sauce sandwiches, I could never get past the idea that the bread stuffing was doubling up the amount of bread in the sandwich. But this reminds me that I should probably ask her if she’d making both.)

If I don’t get online tomorrow, have a great and Thankful day. And leave yourself some extra time to travel, what with the SNOW they are predicting.