We bought the Phantomnator a bone. Cause he’s a dog and we’ve been watching cartoons our whole life. Dogs like bones. They bury them, and they dig them up. They eat them like they are potato chips. Cartoons were so great at explaining how the world works!

So we bought him this bone at Target today, to make up for the fact that we left him in the crate for a large part of yesterday. We were out and about for a chunk of the middle of the day and he’s still too destructive to leave alone in the house without crating.

Anyhoo, the bone is gross and stinky. Very stinky. It smells sort of like feet. Mr. Dump said “Dead feet” and I think he’s right. So I have to figure out how to get the bone away from the dog and into the trash. I fear it smells so bad that little Mr. Nose is going to know exactly what I’m up to.

Ick ick ick. If we get him another one of those, he’s going to have to eat it outside. 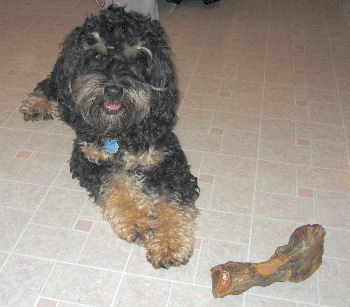