We’ve officially started making note of the “lasts” of 2004. This morning, I pumped gas for the last time in 2004 (unless I decide to make a run for it and road trip hundreds of miles from here between now and Friday. I mean, it could happen, but probably won’t.

The last paycheck of 2004 is coming up. And I need to make the last grocery store run of 2004. I live such an exciting life.

In other news, The Cubes I ordered came in! This morning I set up Ted and Ann. I gave Ted the blue screen of death for his computer, and gave Ann Outlook. But I could have had her playing solitaire. I just didn’t want to have to repremand her on a daily basis for never doing any work. 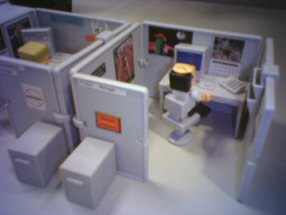 Please note that Ted, above, has donated for Tsunami relief via the links in the upper right corner of every page of this site. I have also added a link to Oxfam America. I saw pictures of boxes of supplies being distributed with their logo on them, and realized these guys are getting in there quickly. Speed is of the essense.