A few shots. I was doing video because I promised to send some recent stuff out to a friend of mine (wait, I’ve already talked about this, right?) and wanted something fall-ish. So when you do that, you don’t take as many shots with the regular camera. This picture is one of the still shots from the video camera. This was our first runner-up pumpkin: 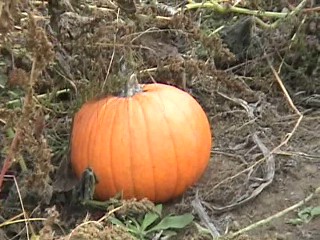 We ended up with a ten-pounder that I happened to pick out. Junior lost interest pretty early on – probaby around the time he discovered that a good 1/4 of the pumpkins still in the field were in some state of decomposing/being eaten by woodland creatures. He was a bit grossed out.

I did catch this photo, and I like it enough that I’ll share it with you even though I don’t normally do that. Apparently, my son is now an L.L. Bean model. 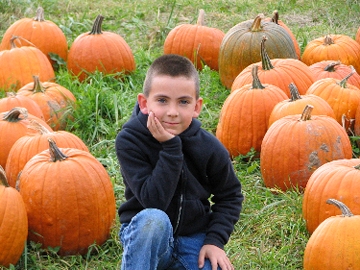