I’m not wearing socks today. Or Sox, as I started to type. People who write it that way are probably either from Boston or Chicago, I suspect.

That means it’s summer. I know it isn’t really summer, it’s just the last day of April, but if I go to work without socks, I’m in summer vacation mode, my friend.

The quote I put up last night (keep reading down)? I want that on a t-shirt. I think I’m going to find a picture of Chuckles on the web, put the text over the picture, and print that puppy out. If we were allowed to have screensavers (there’s a corporate one everyone gets) I’d use that image. I wish I had written that…it’s just so…absurd, and so me. It’s great, and if you don’t think so, well, I won’t be able to explain it.

“I’m not a moose, I’m a pig wearing an origami hat with antlers!”

– The Dark Lord Chuckles, the Silly Piggy on Dave the Barbarian

As a follow-up to yesterday’s accident coverage here at the dump, I wanted to take a moment to mention that as a parent, I want my son to see these things himself so he can be scared to death of the thought of driving a car.

Because quite frankly, it’s that “invincibility” factor that makes a 17 year old boy the equivalent of a large, junkfood-eating torpedo.

He has hazy memories of the Halloween Eve accident where Mr. Dump hit a truck that had run a stop sign, but not enough for it to be useful for scaring him. And he remembers the guy who backed into us at the YMCA, but he had no concept that this small fender-bender did $1500 worth of damage and caused me no end of phone calls dealing with insurance and the rental agency.

I think he’s getting the idea, that people who don’t pay attention and follow the rules are “bad” people who shouldn’t be driving because they could cause an accident and hurt someone. I want him to be a good driver, or I’m never ever going to let him leave the house without me. And you can quote me on that.

Got to witness an accident yesterday. That’s always fun. What’s more fun is being able to think to yourself “Man, you totally brought that on yourself”. Four cars in the high speed lane of 495 had to be doing 75 or 80, based on my speed. All four of them had less than a car length between them. Um, hello, you’re doing 75MPH and you’ve left yourself zero room for error. Tailgating is illegal and dangerous, or did you miss that class in driver’s ed?

What I think happened (and I’m not entirely sure because I was keeping my eyes on my own lane, thankyouverymuch) is that the first car tapped the brake (maybe to make the 2nd car back off? I didn’t see what was in front of car 1.) and the second car hit his brakes harder. The pickup behind the 2nd car swerves mightily into the median, kicking up a cloud of smoke. But then the stupidass tries to just move back into the space he used to occupy in that lane, even though a)he’d moved out of that space, which wasn’t very big to begin with, and b) he was not moving slower than the other cars in the left lane because, well, he’d gone off the road. So he sticks his nose back in and BAM, car 4 slams him, spinning him around backwards back into the median.

Now keep in mind that all this happened in nanoseconds. Basically, car 4 was still trying to slow down from the initial disruption but hey, he was doing 75 when this all started and I’m positive he never expected the guy in the pickup to try to get back into that same little wedge of space. That no longer existed.

I hear those commercials for the cops being out watching for aggressive driving, and these 4 were the poster children for it. And the runner up was the guy who passed *4* of us on a double-yellow line going up a hill with a curve at the top, because he didn’t want to be stuck behind a construction vehicle (who, I might add, was almost going the speed limit). I was just physically preparing myself to witness a horrific head-on crash, but luckily, the arsemobile made it back into our lane before he hit the curve. It must be something to be SO FREAKING IMPORTANT that you don’t have to follow the rules or even drive safely. That double yellow line probably doesn’t apply to you, because you’re an important person with someplace to be. Unfortunately, the place you will end up is in the back of an ambulance if you’re lucky, the morgue if you aren’t. Where are all the cops when you need them to see this stuff?

I’m the first to admit that I kill plants without having to give it much effort. I’m a plant killer. And many times, I’ll plant things that should come up year after year, and they, well, don’t.

Imagine my surprise when I walked around the corner and saw this: 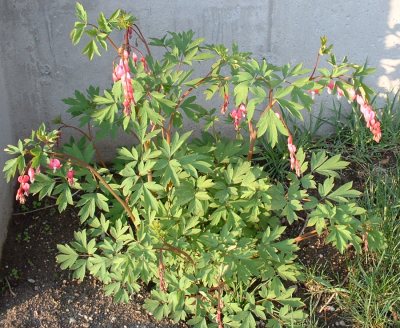 I planted that last year, and it’s BACK! And EARLY! I am buying more of those!

p.s. It’s really kind of nice out right now. Before it got dark Junior was out scootering around the neighborhood. It’s very odd to have the Red Sox game on right now…they are having a rain delay because it’s POURING in Boston. Here? Nothing. I mean, we’re only about 35 miles away…