Back to the Big DumpTruck Blog

I just know I'm going to win the "Coolest 'What I did on my Saturday' award." And if yours was cooler, well, put it on your own website.

We went to this agricultural fair they have every year at a the Templeton Developmental Center's grounds. It's a state facility run by the Mass Department of Mental Retardation (I had no idea there was such a designated group) with about 250 live-in residents (it used to be called the Ferncol School). They run the farm and are self-sufficient as far as dairy, corn, squash, other produce, etc. because they have about 250 acres of farmland. It's on the top of a hill and just gorgeous. Anyway, we go every year, they sell off their excess produce, the different residence halls raise money by selling things like fudge, popcorn, and then vendors/crafts people rent space.

Every year they have a dairy tour, which we'd never taken cause it's about 1/4 mile from the main fair, and we just never wanted to hoof it when Junior was younger (and the little bus wasn't a good idea with a stroller). But this year we decided to go, and took a tour of the dairy barns. SO impressive. They get enough milk that every other day one of the local cooperatives buys their excess (this is actually the brand I buy!) but they process what they will be using right there also.

The photos are in the order taken. There are only two that I tossed for being TOO blurry. And yes, we really were that close...no more than 10 feet away.

Okay, we took the regular tour, just after the tour guide finished explaining why three cows were under a sign that said "Dry cows" (pregnant, so they don't milk them) he noticed that one of them was, well, going into labor. I think they knew she was an "any minute" gal, but there was some mucus coming out of her, and, well, there were some color and size changes in the birth area. He very quickly moved her from her stall to the birthing pen. The cow you see behind her gave birth to that little calf three days ago, and she was VERY freaked out by all the people wandering through for the tours.

Our cow had been standing until about a minute before I took this one. Workers there kept telling us "it could take hours" but somehow we thought maybe not. This is a shot of her first push, a little bit of the amniotic sack starts to come out. Some other guy watching had told people the water had already broken, but obviously it hadn't...she must have peed. 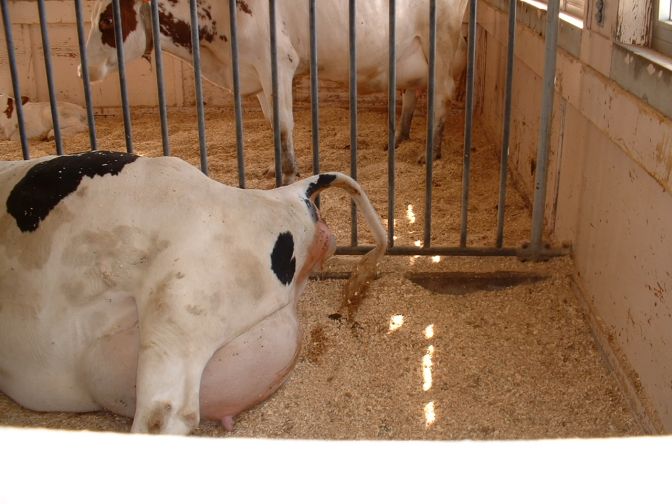 Every time she tried to push, she'd raise her tail out of the way first. Here she gets out more of the sac. 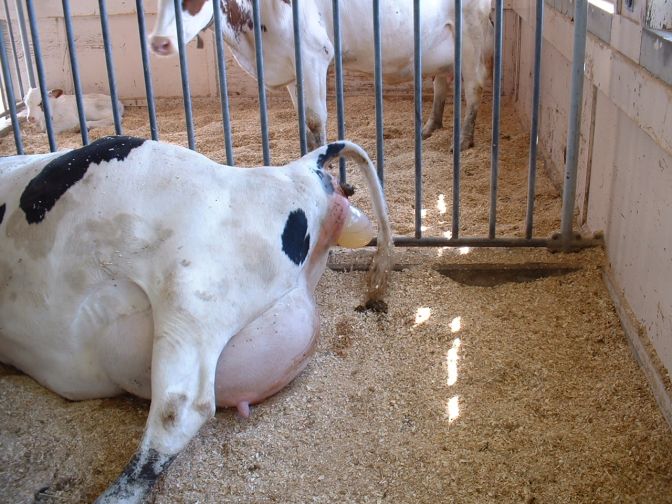 And still more. Poor thing was doing a LOT of work to get her waters out. In this one, you can sort of see a little bit of a white hoof right up at the top. I thought I had a picture of what we saw most of the time we were there, which was the bag and two hooves sticking out. It looked really painful to me, but that's because I've been through labor myself. 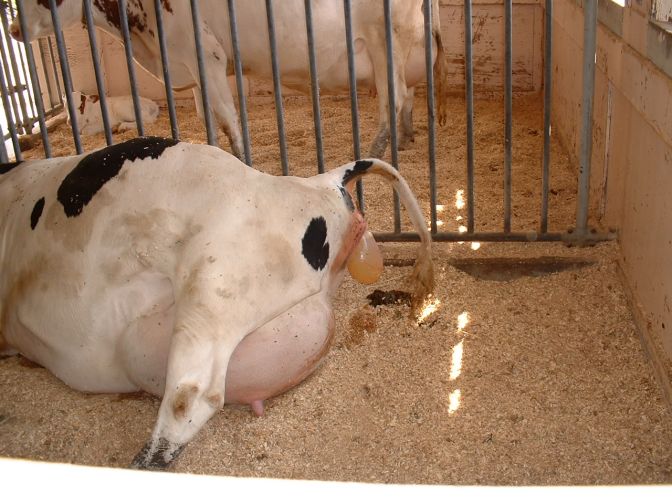 After about 20 minutes of pushing, during which time we had to bribe Junior to not leave by promising him a ride on the mini-rollercoaster for being a good boy, two of the employees decided she wasn't making enough progress. Her pushes got so far as to get the nose and tongue (the tongue sticking out) and the two front legs, but then when she rested, the baby would retreat. So they decided to give a hand, so that the mom AND the baby could avoid distress. (Apparently, one of them thought the baby was too big for her to birth easily) 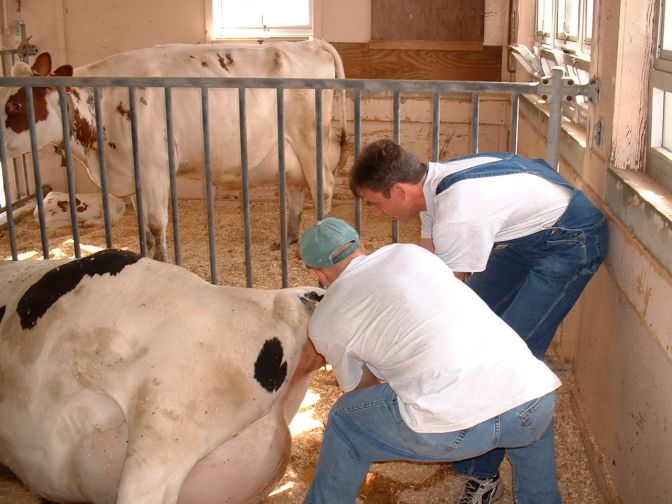 Okay, what you see here is the entire head to about the ears (the front legs are under it). The crowd (maybe 20 of us) just cheered) 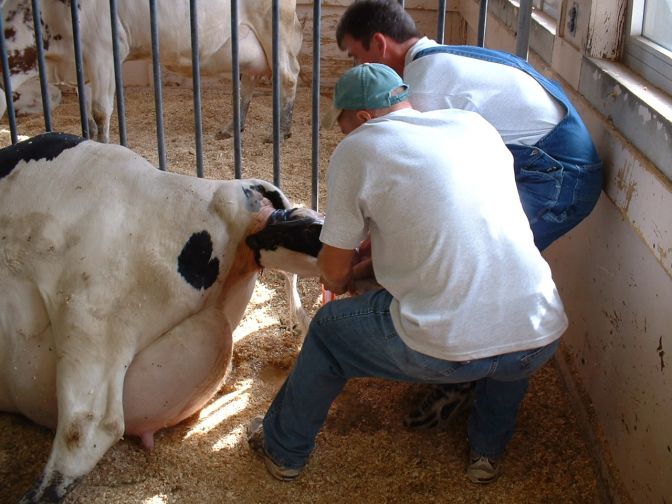 The guys had to move to pull her the rest of the way out. Unfortunately for us, that meant we could only see this. Actually, I could see less. I was holding the camera up, hoping for the best. I think this is cool because those hooves are what we saw for 20 minutes. 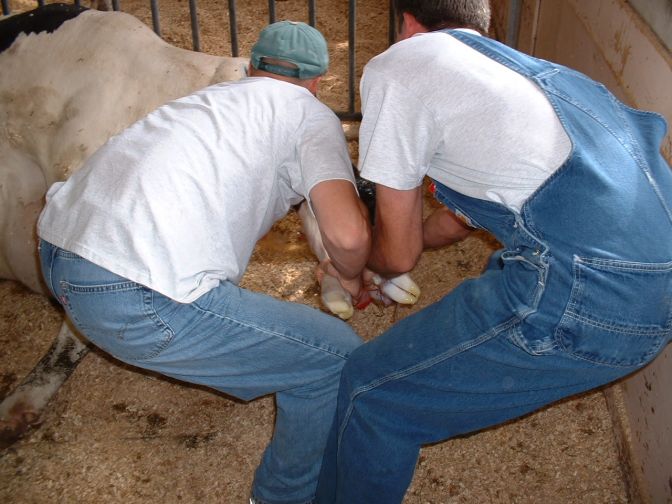 Sorry this one is blurry. You can imagine there was much excitement and jostling at this point. We're talking BRAND new calf. 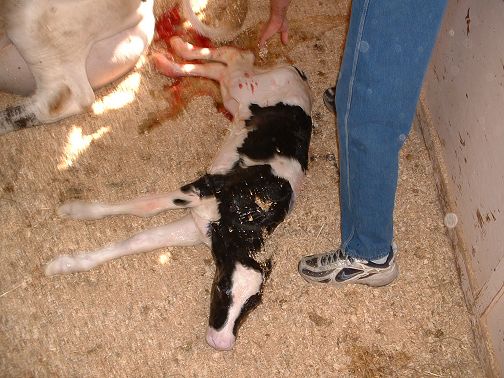 And Mama Starts cleaning her up. Mmmm. Sawdust. That mom, by the way, hopped up immediately. Giving birth took, what, an hour out of her day, and she's back up and around. HMOs had better not take a tour like this. 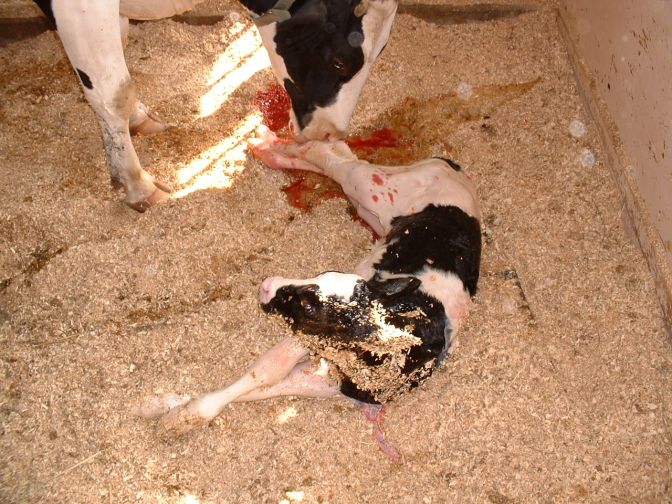 More cleaning. Right around now one of the guys came back, checked, and told us it was a girl. That's considered a good thing on a dairy farm. 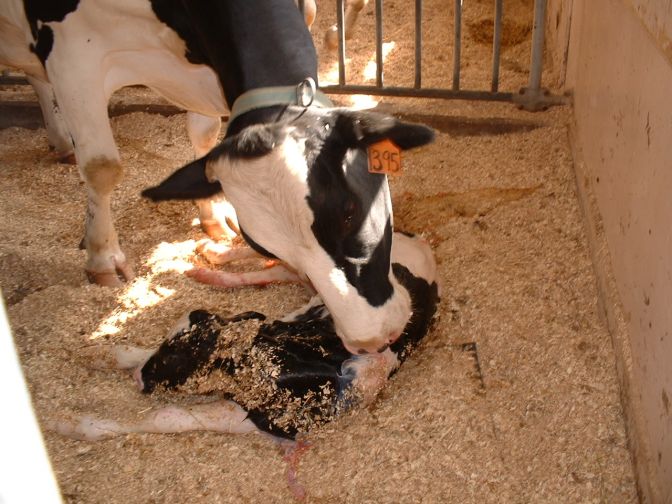 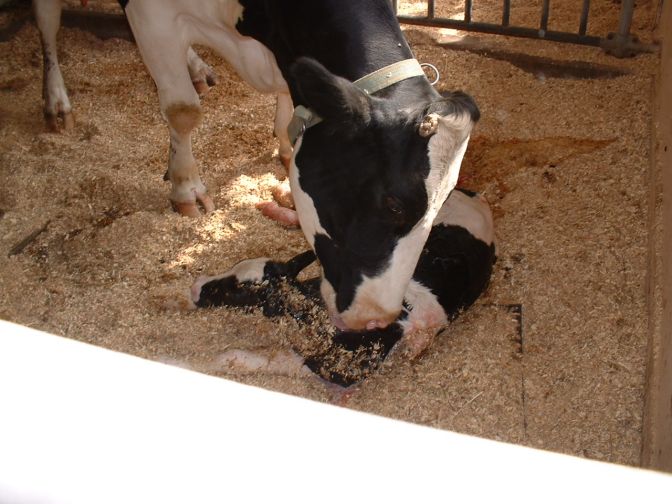 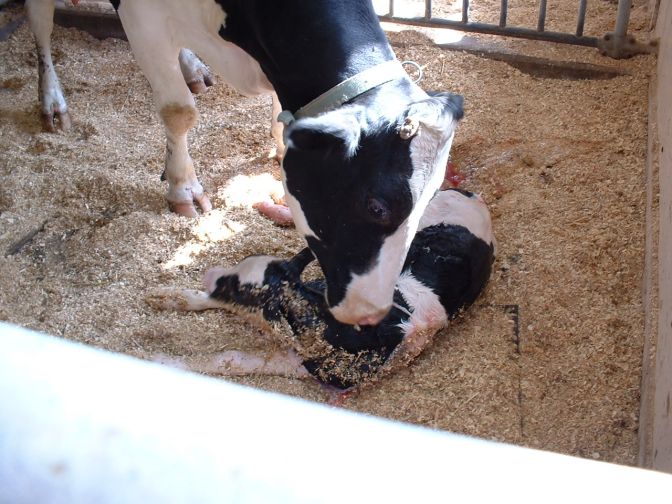 Nice and Tidy. I moved out of the way to let some other people take pictures (we were in the front in the corner) and I never got my space back, so I don't have pictures of her standing or nursing. Maybe next year! 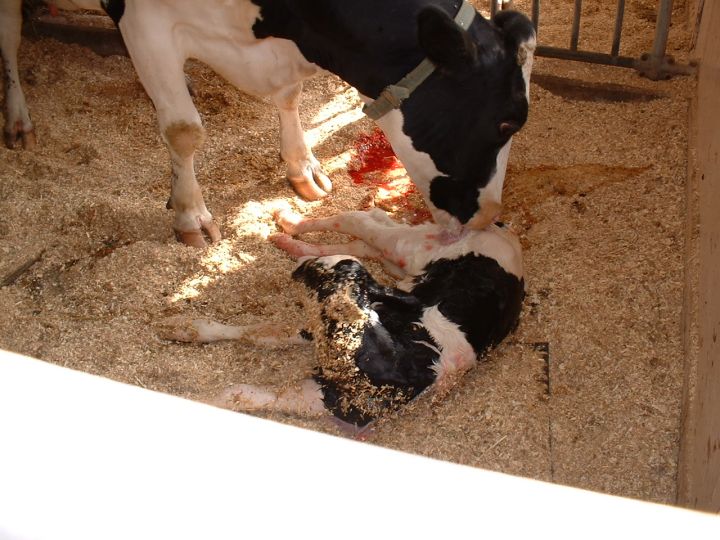 I did just want to say that none of the kids who were standing around the pen with us seemed grossed out or horrified, which was terrific. I think it's FANTASTIC that we all got to be in the barn to see this just because Mama Cow decided that having a baby in the middle of their annual fair would give the kid an extra good start. It must have, cause she's already on the web!