Did you miss me? Oh sure you did! I wasn’t gone very far, just working, writing my nano novel, and cleaning the bathroom. When I actually clean the bathroom, I reward myself by not making me do anything else productive that day.

Actually, I wasn’t home a lot of the weekend, and when I was home, I was busy. We caught my nephew’s last flag football game of the season (“Go Pats!”). We took the dog with us, and he was the happiest pup you ever saw. “So many people to visit! So many blades of grass to smell and taste! Oh, and could someone get this little girl off me? She’s like velcro!” Yes, my niece is madly in love with the pupster. I think it’s because he got his hair cut Saturday morning and he was wearing some lovely doggie cologne. I hate dog smell, and he smelled like anything but that. We’re going to have to take him to the groomer more often.

We got the holiday lights up, because it’s always way more fun to do it when it’s sixty degrees out than when it’s 40 and raining. I like the way it looks, but it feels incomplete to me. We used to always do all 4 shrubs in front of the house, but this year only did 2 of them (and lights around the door). So I won’t stick my neck out and say we’re done, because I’m not convinced we are. But if we don’t put up any more lights, it will still look really nice.

Also, we saw Zathura last night. Without going into any plot-spoiling details, it is a terrific, fantastic edge-of-your-seat movie. Junior loved it, but also was scared by it in places. But that good kind of scared, if that’s possible. It is rated PG and I wouldn’t take anyone younger than 6 or 7, and if the kid is sensitive, I’d wait until 9 or so. It’s a great great movie, but very intense. As I mentioned to my sister, nobody is killed or even hurt, but it isn’t for lack of trying. Kids who are still afraid of monsters getting them should stay the hell home. Don’t say I didn’t warn you. But I would suggest this one to people without kids too. I had a lot of fun.

Okay, the Sentinel (I’d give you a link but I’m lazy. I think it’s just that dot com) had an article about the two restaurants that will be coming to the Orchard Hill Shopping center in Leominster.

I am quite literally beside myself with joy over one of them. The other I could live without ever setting foot in again. Let’s start with the latter. Everyone knew it was going to be the Olive Garden. Well the official word is out. But the last restaurant is the one that I am BEYOND THRILLED to have so close to home. We have nothing at all like it in the area, but not only that, the food is outstanding. We are getting…a Smokey Bones! WOOOOO! Everyone stand up and cheer, and get ready to order skillets of corn bread with pecan butter, baby. And the pulled pork. Junior ate half of mine the last time we went to the one in Nashua, and this kid doesn’t eat things like pulled pork. Oh joy!

For your Wednesday enjoyment, I present “Jody In The Round” a 1-woman extravaganza in SurroudRead

So it was only about 50 degrees and super windy today. Still, if you only went by the following photo (taken at lunch where I work) and you ignored the leaves in the foreground and the random bare trees, you might think this picture was taken in late spring. (Speaking of the wind…yes, that was a strip of shingles from the roof lying on the driveway when I got home.) 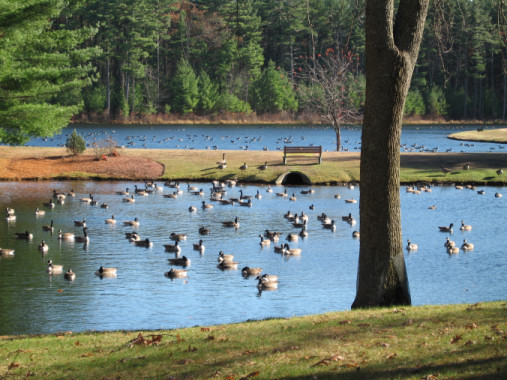 This picture is glorious full size (It’s reduced to about 15% for this picture). It is in my top three favorite pictures I’ve ever taken, and right now it’s my desktop background image. See, fall can be beautiful, even without pretty red and orange leaves!

Okay, this past week and weekend we finally had our peak foliage, in my humble opinion. Not that I hate stretching out fall, by any means, but I was just so delighted to actually see some actual color. 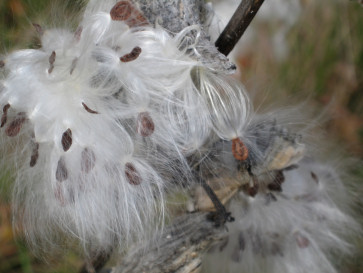 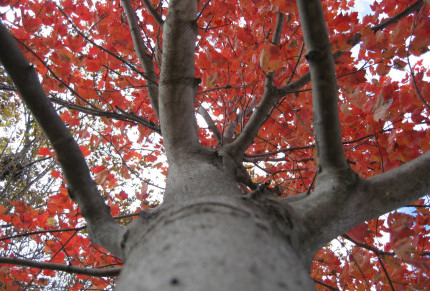